White Gold Corp. (TSX.V: WGO, OTC – Nasdaq Intl: WHGOF, FRA: 29W) (the “Company”) is pleased to announce multiple high grade surface samples along strike from the recent Vertigo discovery and further expanding the footprint of the high grade mineralized system. Surface grab samples were taken on the Vertigo target along trend from the recently announced discovery hole which encountered 56.25 g/t Au over 3.05m within a broader intercept of 17.34 g/t Au over 10.67m from 3.05m depth (announced September 17, 2018) as well as on the undrilled Suspicion target area 4.1km along trend from Vertigo on the Company’s JP Ross Property, Yukon Canada. The samples are interpreted as being in-place and representative of the bedrock below due to the unglaciated nature of the area. Images to accompany this news release can be found at http://www.whitegoldcorp.ca/investors/exploration-highlights/.

Grab samples are selected samples and are not necessarily representative of the mineralization hosted on the property.

“These results further validate our belief that the Vertigo is a large-scale, high-grade, structurally controlled gold system. The results of up to 139.9 g/t gold at Vertigo are among the highest grades seen in the White Gold district and significantly expand the footprint of the mineralized system.” stated Jodie Gibson, VP Exploration of the Company.  “The findings at the Suspicion show the potential for additional high-grade discoveries over the +12km Vertigo Trend, and we look forward to the results of our follow up work in the area.”

Rock grab sampling on the Vertigo target defined strong mineralization over a 1.1km NW trend with results ranging from trace to 139.9 g/t Au, including 3 samples >132 g/t Au with 7 samples >10 g/t Au and 11 samples >1 g/t Au. These results also extended several of the 10 mineralized zones (V1 to V10) currently recognised over the 1,100m x 1000m target area, with individual zones having been traced up to 400m along strike with all currently open along strike and at depth.

A sample collected from the V2 zone returned 139.9 g/t Au and was associated with meter scale boulders of quartz veining and brecciation with strong iron-oxide staining and visible gold. Follow up sampling and initial RC drilling is being conducted in the area and the results will be released in due course.

Approximately 600m to the NW of the central Vertigo target, a sample collected from a new area returned 132.9 g/t Au from strong brecciated and sericite altered gneiss with vuggy quartz veining and strong iron oxides. The sample also returned >100 g/t silver and over limit assays of silver and other pathfinder elements are currently in progress. Follow up work is currently in progress to determine if this an extension of a known target or a new zone of mineralization.

Eight samples from approximately 100m east of the previously released RAB drilling results returned values ranging from 0.152 – 134.6 g/t Au, averaging 28.7 g/t Au, and one sample greater than 1,000 g/t silver and are associated with eastern projections of the V3 to V6 zones. The mineralized samples consist of stock work to lode style quartz veining, brecciation, and strongly sericite-clay altered felsic gneiss with abundant iron-oxide filled fractures and scorodite staining. Disseminated to massive (>50%) pyrite, arsenopyrite, galena, and locally visible gold mineralization is associated with the samples. Four of the samples also returned >1% Pb and/or >100 g/t Ag and over limit assays of pathfinder elements are in progress for these samples.

Significant results from the Vertigo target are detailed in the table below: 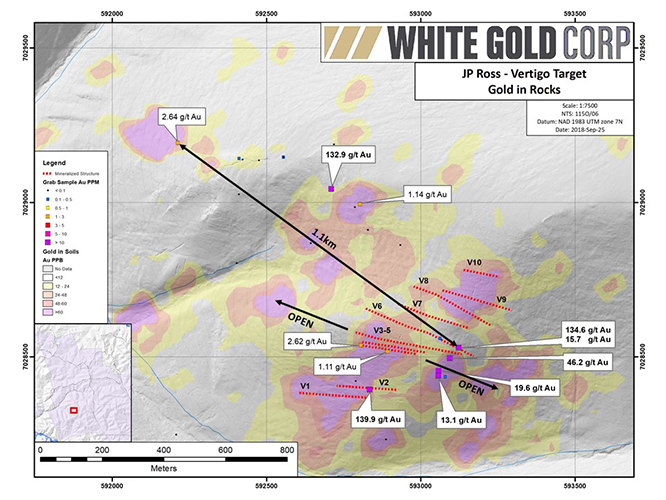 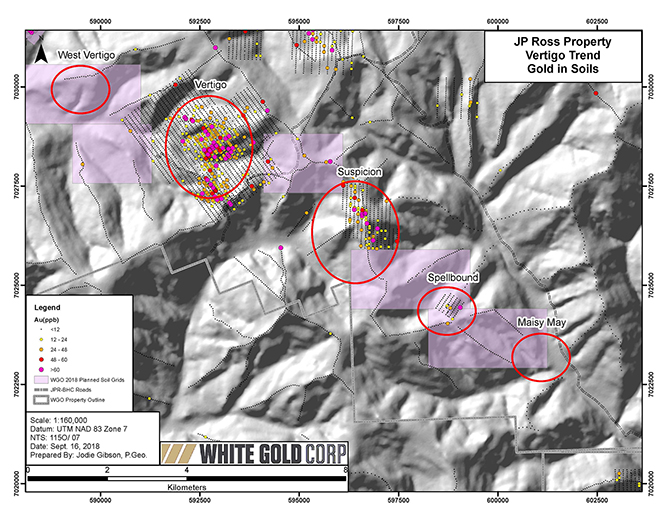 Significant results from the Suspicion target were encountered at the southern end of the target area, beyond the limits of historic soil sampling. Five rock grab samples collected over a 150m trend returned values from 0.761 – 41.8 g/t Au; averaging 15.7 g/t Au. The mineralization is association with elevated Ag, Bi, and Pb and is very similar to the Vertigo target.

Significant results from the Suspicion target are detailed in the table below: 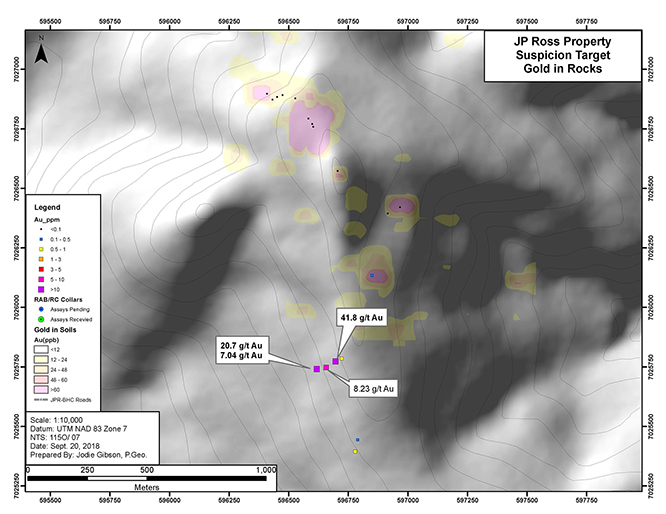 The Vertigo target is located on the Company’s JP Ross property, approximately 75km south of Dawson City, Yukon and 25km north of its Golden Saddle deposit. The JP Ross property is road accessible from Dawson City and the Vertigo Target is within 2km of an existing road.

Mineralization on the Vertigo consists of brecciation, quartz veining, and strong sericite alteration with disseminated to vein-controlled pyrite, arsenopyrite, galena, bismuthinite and locally visible gold. At least 10 individual zones (V1 to V10) are currently recognised over a 1,100m x 1000m area, with individual zones having been traced up to 400m along strike and all are currently open along strike and at depth. The mineralized zones are associated with a series of W-NW trending, steeply dipping structures and splays associated with a regional-scale fault system that has been traced over 12km. Four additional target areas are currently recognised along this trend and follow-up geologic mapping and prospecting is ongoing.

The Suspicion target is located on the Company’s JP Ross property, approximately 4.1km to the SE of the Vertigo target. The unexplored target is associated with a gold in soil anomaly of up to 4263 ppb Au.

Based on geologic mapping conducted in the area, six NE trending structural zones associated with alteration and quartz veining are currently recognised. It is associated with strongly sericite altered felsic gneiss with stock work quartz veining, brecciation, strong iron oxide development, and, locally, visible gold. Geologic mapping and prospecting is ongoing in the area and the target will be tested with RC drilling.

The JP Ross property is comprised of 2,251 quartz claims covering over 46,000 hectares of exploration ground which currently has at least 14 known anomalous trends including the Vertigo and Suspicion, and numerous placer gold bearing creeks. The property is located 25km north of the Company’s flagship White Gold property which has a mineral resource of 960,970 ounces Indicated at 2.43 g/t gold and 262,220 ounces Inferred at 1.70 g/t gold and 55km north of the Coffee project owned by Goldcorp Inc. (TSX: G, NYSE:GG) with a M&I gold resource(2) of 4.1M oz. Historic exploration performed on the JP Ross property by Underworld Resources and Kinross Gold includes geochemical surveys, trenching, airborne magnetic and radiometric surveys, and 8,592m of diamond drilling over 64 holes. 14 target areas are currently known and large portions of the property are unexplored. Key areas identified as priorities in 2018 include the Vertigo, Rebecca and Sabotage Trends.  Historic work on the Vertigo target(1) produced trench results of 4.28 g/t Au over 5m within a broader sampling range of up to 1.05 g/t Au over 45m, and a historic drill hole which intersected 17.9 g/t Au over 1 m.

The Company owns a portfolio of approximately 20,000 quartz claims across 30 properties covering over 390,000 hectares representing approximately 40% of the Yukon’s White Gold District. The Company’s flagship White Gold property has a mineral resource of 960,970 ounces Indicated at 2.43 g/t gold and 262,220 ounces Inferred at 1.70 g/t gold as set forth in the technical report entitled “Independent Technical Report for the White Gold Project, Dawson Range, Yukon, Canada”, dated March 5, 2018, filed under the Company’s profile on SEDAR. Mineralization on the Golden Saddle and Arc is also known to extend beyond the limits of the current resource estimate. Regional exploration work has also produced several other prospective targets on the Company’s claim packages which border sizable gold discoveries including the Coffee project owned by Goldcorp Inc. with a M&I gold resource(2) of 4.1M oz and Western Copper and Gold Corporation’s Casino project which has P&P gold reserves(2) of 8.9M oz Au and 4.5B lb Cu. The Company has outlined an aggressive exploration plan backed by partners Agnico Eagle Mines Limited and Kinross Gold Corp. For more information visit www.whitegoldcorp.ca.

Jodie Gibson, P.Geo. and Vice President of Exploration for the Company is a “qualified person” as defined under National Instrument 43-101 (“NI 43-101”) and has reviewed and approved the content of this news release.

These forward-looking statements are based on reasonable assumptions and estimates of management of the Company at the time such statements were made. Actual future results may differ materially as forward-looking statements involve known and unknown risks, uncertainties and other factors which may cause the actual results, performance or achievements of the Company to materially differ from any future results, performance or achievements expressed or implied by such forward-looking statements. Such factors, among other things, include: the expected benefits to the Company relating to the exploration conducted and proposed to be conducted at the White Gold and JP Ross properties; failure to expand or identify any additional mineral resources; the preliminary nature of metallurgical test results; uncertainties relating to the availability and costs of financing needed in the future, including to fund any exploration programs on the White Gold and JP Ross properties and the Company’s other properties; business integration risks; fluctuations in general macroeconomic conditions; fluctuations in securities markets; fluctuations in spot and forward prices of gold, silver, base metals or certain other commodities; fluctuations in currency markets (such as the Canadian dollar to United States dollar exchange rate); change in national and local government, legislation, taxation, controls, regulations and political or economic developments; risks and hazards associated with the business of mineral exploration, development and mining (including environmental hazards, industrial accidents, unusual or unexpected formations pressures, cave-ins and flooding); inability to obtain adequate insurance to cover risks and hazards; the presence of laws and regulations that may impose restrictions on mining; employee relations; relationships with and claims by local communities and indigenous populations; availability of increasing costs associated with mining inputs and labour; the speculative nature of mineral exploration and development (including the risks of obtaining necessary licenses, permits and approvals from government authorities); the unlikelihood that properties that are explored are ultimately developed into producing mines; geological factors; actual results of current and future exploration; changes in project parameters as plans continue to be evaluated; soil sampling results being preliminary in nature and are not conclusive evidence of the likelihood of a mineral deposit; title to properties; and those factors described under the heading “Risks and Uncertainties” in the Company’s most recently filed management’s discussion and analysis. Although the forward-looking statements contained in this news release are based upon what management of the Company believes, or believed at the time, to be reasonable assumptions, the Company cannot assure shareholders that actual results will be consistent with such forward-looking statements, as there may be other factors that cause results not to be as anticipated, estimated or intended. Accordingly, readers should not place undue reliance on forward-looking statements and information. There can be no assurance that forward-looking information, or the material factors or assumptions used to develop such forward-looking information, will prove to be accurate. The Company does not undertake any obligations to release publicly any revisions for updating any voluntary forward-looking statements, except as required by applicable securities law.

Neither the TSX Venture Exchange (the “Exchange”) nor its Regulation Services Provider (as that term is defined in the policies of the Exchange) accepts responsibility for the adequacy or accuracy of this news release.

About The Wall Street Analyzer 1244 Articles
The Wall Street Analyzer's staff of writers, analysts, publishers, producers, market researchers, and PR professionals aim to provide investors with the tools they need to make informed decisions on buying stock. Our staff is a mix of financial professionals and media savvy individuals whose experiences bring the best talent from both ends of the spectrum.